For Christmas two years ago, Mason asked for a matchbox car garage, a lego set with guns, and an American Girl doll.

(And yes, you better believe I would have bought my son a trendy, over-priced doll had I know it would be my last Christmas with him.)

It’s not that he actually loved dolls.

It was that he loved his sister. And she loved dolls. And she had just saved her money to buy her own American Girl doll and she absolutely loved everything about dolls at that moment.

So for Mason, having an American Girl doll was having something he could enjoy with his sister.

And legos were Bennett’s favorite thing. And Griffin was really getting into cars at the time and they played together, driving and racing cars, for hours (or as long as Griffin didn’t touch Mason’s special ones.)

(Not that I’m trying to misrepresent him as a selfless saint. But. He did sure love his siblings.)

Christmas was brutal for me this year. What once brought me giddy happiness, now just makes my heart ache. I would sit in the quiet of night and look at the Christmas tree and see Mason’s ornaments through the years. I would see gifts under the tree that don’t have his name. And I wondered, what would have been on his wish list this year?

I made moose sugar cookies to honor the boy who isn’t sneaking cookie dough when I’m not looking. When we make our snowflakes and gingerbread houses, I picture Mason there, making gingerbread bombs and snowflake grenades. And out of all of us, he’d be the one most likely to help Griffin, sitting next to him, encouraging him with the profound patience I saw manifested absolutely nowhere except with his little brother.

This season, we did advent and tried to keep up with the traditions we established in happier days. And I do still enjoy these memories with my kids, but new memories are always missing someone. And that just isn’t easy. In fact, its unbearable.

I see the absence everywhere I look. I feel it every time I breathe.

I try to fake it for my kids. I would make Christmas cookies and ooh and ah over Christmas lights and decorate our tree and remember previous years memories.

But I also try to be honest. Because faking it through the sudden loss of a loved one doesn’t do anyone any favors. So along with our happy Christmas memories, there were also times of deep grief… sharing tears and acknowledging our pain.

Sometimes it’s the honesty and recognition of the darkness of our lives that makes the brightness of hope all the more necessary.

One night, when reading our advent, I heard this account of John the Baptist in a whole new way.

“Calling two of his disciples to him, John sent them to the Lord, saying, ‘Are you the one who is to come or shall we look for another?’” Luke 7:19

John was in prison. For speaking truth and prophesying hope. It may have been dark. It was probably dismal and oppressive. It was most certainly lonely.

And so he asks the question of Jesus, are you the one?

I can’t help but think that John already knew the answer to this question. He was filled with the Holy Spirit from birth. He was empowered, directly from a sovereign God, with prophetic messages about the Messiah. Not only was he there the day his cousin stepped into his ministry on this earth, preparing to die for our sins, but he baptized Jesus himself and heard the voice of the almighty God from heaven.

John’s life was devoted to preparing the world for the Savior. And what was once so clear when he could hear the voice of God and see the Holy Spirit descend from heaven, may have dimmed in the darkness of his prison cell.

And day after lonely day of enduring prison, maybe deep down, he knew Jesus was the Messiah. But maybe he didn’t necessarily feel it. Maybe he knew all the prophecy and he knew the power of the Holy Spirit and he knew the truth. But perhaps, he had grown weary in his chains. Perhaps what once felt so powerful standing in the Jordan River started to fade as he felt locked away and forgotten.

And maybe he was close enough to the God of the universe, maybe he knew his cousin well enough, to be honest with his emotions. Jesus accepted his honesty, his pain. “Are you the one?”

There was no end in sight to his imprisonment. No trial. No hope of release. And ultimately, it didn’t get any better for him. He was beheaded on the whim of a heinous woman and his head was paraded around a banquet hall. I mean, could this humiliating ending to a faithful life be worth it?

Are you the one?

This Christmas, I wasn’t really feeling it. I believe in the hope and in the Savior and the redemption of Christmas. With every part of my soul. But I wasn’t feeling it this year. Quite honestly, I was just ready for it to be over.

I would hear my favorite Christmas lyrics, “A thrill of hope… a weary world rejoices…”

And I would sigh.

Here’s the deal. I believe in the hope. I believe it is indeed a divine and holy night. Amazing really.

But I am just so, so weary. And I just didn’t really feel like rejoicing this year.

Because sometimes my own life feels dark and dismal. And the life-giving, exuberant emotions I have felt in response to absolute truth and powerful hope… can dim as grief wears on. The intensity of missing Mason doesn’t diminish over time. It increases. And that just makes this life so incredibly exhausting.

But because I know the Savior like I do, I know that he accepts my honesty. He doesn’t get angry when I say, “I’m not feeling it this year. It hurts. I’m sad. I’m so weary of this pain day after day after day. And really, will this all be redeemed? Really?”

We got boxing gloves for the boys for Christmas. There has been much laughter (and a few tears) as the boys pummel each other over and over. While I watch them and brush aside that nagging feeling that perhaps this was an unwise purchase and something is going to break, I can’t help but think about Mason. Shouldn’t he be here? Naughty laughter and rambunctious energy, in the middle of the melee? I try to picture him, to hear him. And then for some reason, all I see is images of him in the hospital instead. Final moments that I can’t erase.

Will this really be redeemed?

Sometimes, that’s my version of John’s question, Are you the one?

When I used to read Jesus’ response to John’s disciples, it often felt a little impersonal to me.

“And he answered them, ‘Go and tell John what you have seen and heard: the blind receive their sight, the lame walk, lepers are cleansed, and the deaf hear, the dead are raised up, the poor have good news preached to them.'” Luke 7:22

But now I see it different.

When Ella read Jesus’ response to John to our family that night, I no longer heard a generic, impersonal statement. He’s not saying, come on. You know better. Instead, I hear a longing in Jesus’ voice to encourage. And the compassion he has for the suffering. His understanding of John’s darkness.

I think he mourns that his cousin is in prison. And just maybe his heart hurts for the pain, the confusion, the grief, the injustice… the longing for hope.

The compassionate God I know welcomes the question. “Are you the one?

“It’s dark in here. It’s lonely. Will this really be redeemed?”

His answer wasn’t a resume of things he was doing. He was quoting prophecy from Isaiah. Prophecy that John would have known, prophecy that Jesus was fulfilling. Prophecy that defined everything about John’s own ministry. When Jesus stated this, I tend to think he was pointing John to other answers, more prophecies, more promises. More hope.

Because in that same reference to Isaiah, the prophecy he was assuring John he was fulfilling, John would be able to recall, “Be strong, do not fear; your God will come, he will come with vengeance; with divine retribution he will come to save you.” Isaiah 35:4

It was almost like he was speaking in code. Maybe in his answer Jesus is whispering:

It may be dark in your prison cell. And it may even get darker. But take heart, I will overcome the world!

Anthony took each kid out for a special time alone this past week. With each of them, he set goals for the New Year. And I admire that he always tells them to aim high. He encourages them that its better to try really hard and not obtain everything, than to just set things you can control and not really have to challenge yourself.

And so that makes me think of goals for myself. I’ve never really been someone who sets “resolutions.” (Probably something to do with that streak of rebellion I can’t quite suppress… the one that doesn’t like the idea of doing something just because you “should.”)

In many ways, I’m unable to look at the year as a whole. It truly takes everything in me to make it one more day. My new years resolution is: “Make it through January 1st.”

And then each day, one day at a time after that.

But each of those days, that I breathe in and out, I want the whispers of God to always bring me back to the promises of hope.

Not because of my circumstances, but in spite of them. Hope, not that my tears may ever cease on this earth, but because one glorious day they will all be wiped away by the same hands that hold Mason when I can’t. 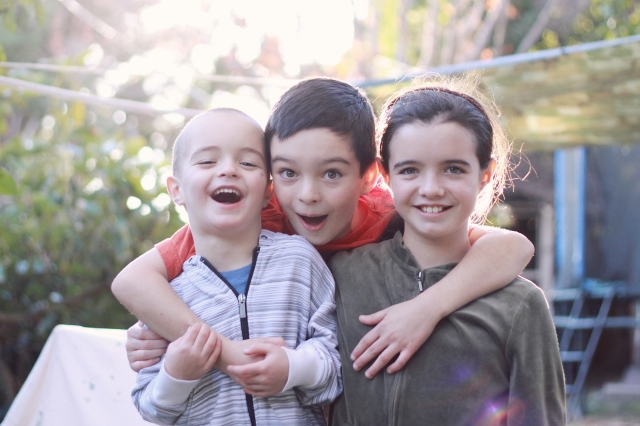 This year, I want my children to see and experience hope. Not because this life should be happy and perfect, but precisely because it isn’t.

“And the ransomed of the Lord shall return and come to Zion with singing; everlasting joy shall be upon their heads; they shall obtain gladness and joy, and sorrow and sighing shall flee away.” Isaiah 35:10

The answer Jesus gave to John also points to this promise in Isaiah. A promise sent to me as a prayer earlier last year by my sister. A promise I cling to and pray over my children constantly.

“To proclaim the year of the Lord’s favor, and the day of vengeance of our God; to comfort all who mourn; to grant to those who mourn in Zion-to give them a beautiful headdress instead of ashes, the oil of gladness instead of mourning, the garment of praise instead of a faint spirit; that they may be called oaks of righteousness, the planting of the Lord, that he may be glorified.”  Isaiah 61:2-3

Redemption for unmet expectations and for years of incomplete memories.

Redemption, not actually for our happiness and comfort, but ultimately, that he may be glorified.

This year, I want to know truth so deeply that when hints of it are whispered at me in the dark, those whispers shine brighter light and remembrance of a much bigger promise.